You join me this week in Bennett’s Bar, which is right next to the Kings Theatre though I don’t know if it’s frequented by the luvvies. This pub can probably lay claim to being my “local”. By frequency rather than proximity. We often go there for a pre prandial prior to a visit to Indaba, ( Zulu, a council or conference especially with indigenous tribes of South Afica) our favourite tapas restaurant.

High ceilinged with lots of old wood and ornate mirrors, a good selection of beers with seven on cask, four regulars and three guest, an extensive selection of tourist attracting malt whiskies, and a fine choice if you are a “gin goblin”- just saw that phrase today in music shop window and I thought it was neat!  ( only if you don’t add the tonic, Ed.)

If you’ve never heard of the Gin Goblins don’t bother checking them out unless you are a punk completist. Punk – what was that all about?- a reaction against the pretentiousness of prog rock?  Tubular Bells, pop operas maybe.  Also an element of reaction against the evisceration of trade unions that was going ahead in the 70s?  ” The unions have been busted their proud red banners torn” ( from Christmas Time in Washington, Steve Earle )

In times past Scottish pubs were often built with a “snug ” area which was partitioned off from the main bar area. Women and children could wait for the menfolk there. (?)  You can check that out in Bennett’s. Presumably the children had to be accompanied by adult females or maybe they sneaked in to sample what was the precursor of alco pops? The snug was probably the forerunner of the ” lounge ” bar. You know, that space where middle class wankers didn’t have to mix with the hoi polloi when their date gives them that I’m not going in there look. 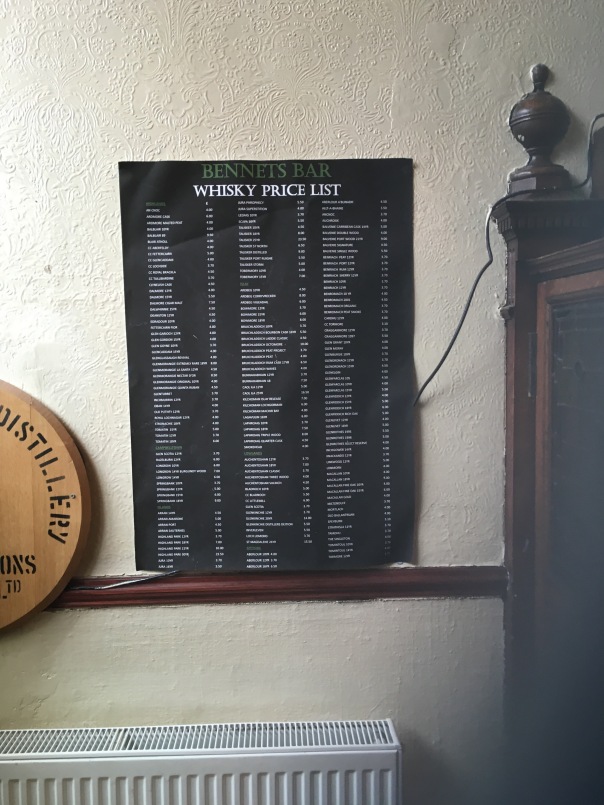 What I like about Bennett’s is that it has a mixed clientele of locals, tourists and normal punters and a marked absence of suits.

The staff are friendly and the glassware clean which kept my recent pints of Fairmaid and Good Old Pale in fine condition til the last draught.

View along bar top toward the Snug 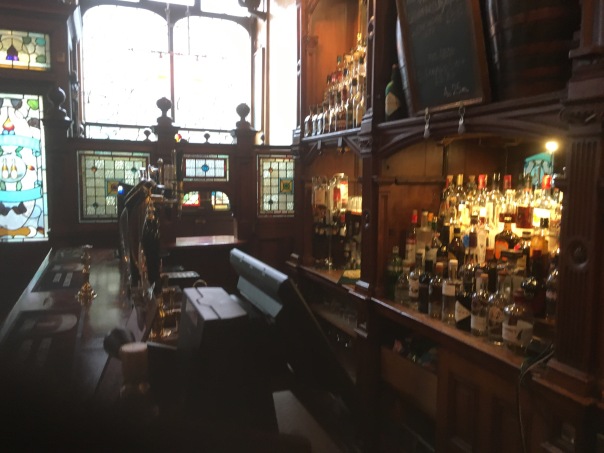 Articles that have recently caught my eye:

A Saudi blogger Raif Badawi was sentenced to 10 years and 1,000 lashes for ” insulting Islam through electronic channels” He received the first 50 lashes about a year ago.

Ireland re-introduced blasphemy laws in 2009  ( not very up to date, Ed. ) and some commentators seemed to think that this was a cynical ploy to attract Saudi Arabian investment. Surely not!  Some folks seem to lack a charitable disposition towards politicians. Oh yes and an academic in Trinity College Dublin, has threatened to sue ( suppose that might be better than having your hand cut off or being castrated ) anyone who “insults” Islam. And that the Charlie Hebdo cartoons are legally unpublishable there.

Yesterday the news that the EU has not granted a new licence to Monsanto for glyphosate backs up my thoughts re campaigning websites and their widening influence. Independent tests to be done before a final decision on it’s continuing use or ( hopefully ? ) a ban.

If TTIP had been in place we would be getting sued for millions.

Last year we listened in to an Aussie soil scientist ( in a pub near the hippy Findhorn Foundation ) telling his new acquaintance how vast areas of agricultural land worldwide have become unhealthy and under productive. Who is responsible for this? Is it giant corporations? Is it smaller family run businesses? Well this week in the UK a report says that some of our most productive land could be unprofitable within a generation. Notice the emphasis on unprofitable.

The government was also criticised for failing to do enough to keep the country’s soils in good condition for future generations.  Is that not the responsibility and indeed duty of those who farm the soil?  Here in Scotland our environmental protection agency has produced a guide to encourage our farmers to value their soils. I find it amazing that people who live off the land do not care for the land. This could be one of the reasons why the preposterous Common Agricultural Policy is needed. On which subject why the fuck do we have to subsidise the production of food?

I was in one of my favourite shops yesterday. This place has a fantastic selection of mostly local produce. On the counter as I was waiting my turn to pay, my eye was taken by a form which was used to note on a weekly basis which goods went to the waste bins. It also noted the number of each item and the cost. Because of the nature of the shop selling lots of perishable fruit and veg this struck me as clever business practice. Keeping a close eye on income and expenditure is vital. However it made me think ” how much wastage is a business prepared to tolerate as long as it still cuts a decent profit?”  About a month ago I saw our local tramp benefitting from this discarded but still edible produce.

It is probably generally thought that the big supermarkets, who account for 87% of our groceries, are most to blame for the UK’s 14 million tonnes wastage. However it is necessary to look closer to home as household food waste accounts for more than 40% The UK tops the EU wastage league by millions of tonnes. However I don’t think population size was factored in so it’s probably not surprising that we waste more than Malta. Eco tourism, you’ve probably heard of it. How about Eco non- tourism where we don’t visit countries that slaughter migratory songbirds for fun.

Japan ” scientific ” whaling. How about economical sanctions  ( how come you and your missus both have Japanese cars then?  Ed. )

The point I’m trying to get over with these two examples is that if we have the opportunity to change something for the better, then let’s do just that and not sit around girning e.g. about child poverty, in the expectation that other folks will do so.

Over a million people make use of food banks in the UK .

India wastes as much food as the UK consumes, including 21 million tonnes of wheat.

UN Development Programme says about 40% of bought food is wasted.

On a happier note, or two. Last week we were fortunate to attend a concert celebrating the 50th anniversary of the release of Pet Sounds. Often regarded as not very successful commercially at the time-although it had several big hit singles lifted from it- Brian Wilson’s masterpiece was hugely influential and inspired many of that eras emerging and established stars such as Clapton ( really! ) Tom Petty, Barry Gibb, Elvis Costello, Elton John, Carole King, Rod Argent, Alice Cooper, Lindsey Buckingham, Pete Townsend and Roger McGuinn amongst many others.

George Martin:  ” Without Pet Sounds Sergeant Pepper would never have happened. Pepper was an attempt to equal Pet Sounds”

A wonderful night of music.

And ” Wouldn’t It Be Nice” to have a bar like Bennett’s Bar close by?